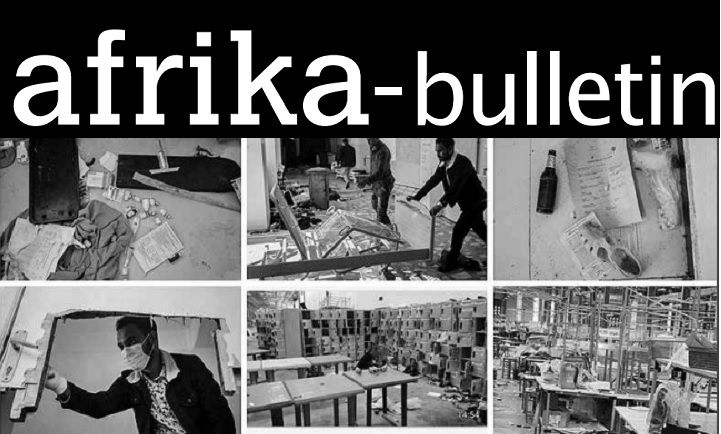 The following statement has been forwarded to us by Zenebe Kebede Korcho, Ethiopian Ambassador to the UN in Geneva, as an update to the article in Afrika-Bulletin No. 186.

For 27 years, the TPLF (Tigray People’s Liberation Front) presided over a totalitarian government. It dominated the ruling EPRDF coalition. The military and the security were led by senior TPLF figures. They made sure almost all senior officers of military and the security were TPLF members. TPLF ran a parallel economic structure with its own party owned businesses, which were above the laws of the country. TPLF members and supporters dominated the country’s most important economic sectors. Through its extensive networks, it plundered the country’s resources.

It led the country with an iron fist. Its brutal violations of human rights record widely recorded by national and international human rights groups. People were pushed to the limit. This led to a widespread opposition to TPLF, which refused to accept its responsibility. This led to a peaceful change of government in 2018 with Dr. Abiy Ahmed as the Prime Minister. The reformist Dr. Abiy asked the people of Ethiopia for forgiveness for the brutal years of TPLF and released political prisoners. He reformed the Military, Security Services, and the Judiciary. With his proposals and instances, the country is now led by a women President, women lead the Judiciary and the National Election Board, and make up 50 percent of his previous and significant number of his current cabinet. He put in motion the reform of legal system widening the political space for opposition parties to operate in the country and creating conducive environment for civil society organizations to operate freely. He has led a reform of the economy, increasing the role and the participation of the private sector. Importantly, he insisted that people should work towards togetherness/unity than division.

Dr. Abiy took the courageous trip to Asmara, the capital of Eritrea, ending 20 years of “no war no peace” situation with Eritrea. For this historical step and the many reforms he undertook in the country, he was awarded the Nobel Peace Prize in 2019.

Only one group saw these developments as a threat to their survival—the TPLF. Its leadership started to attack the reforms. They become very hostile to the country’s people living in peace with neighbors and that the opposition groups are allowed back in the country. They feared that their unfair economic supremacy was threatened. It pooled out TPLF members from the House of Peoples’ Representatives and other Federal Institutions. It just could not accept to serve where its supremacy was not the norm. It rejected equality. It was used to rule for far too long. TPLF former leaders retreated to Mekelle, the capital of Tigray region. The government under Prime Minister Abiy attempted to resolve its differences with the TPLF peacefully. Respected elders and religious figures took the initiate to convince peaceful resolution of the disputes. They travelled to Mekelle and met TPLF leadership. TPLF refused
to engage in dialogue with the government. Instead, they started taking very provocative steps. They held sham regional elections in violation of the Constitution. The Government appealed to their senses not to allow the situation to deteriorate.

They responded with their usual belligerence. They began training a total of 250,000 comprehensive paramilitary units by covertly deploying Tigray-born military personnel. As the border conflict with Eritrea was not resolved/border not demarcated, Ethiopia maintained 80 percent of the army stationed in Tigray. The majority of the country’s arsenal were also deployed in Tigray. With the newfound peace, Dr. Abiy’s Government wanted to redeploy the army to other areas of the country. TPLF mobilized young kids to block the roads in
opposition.

The surprise attack of November 3, 2020
On top of all these machinations, TPLF launched nighttime attacks on the army stationed in Tigray. The attacks took place in 120 locations simultaneously on November 3, 2021. It was coordinated and long-prepared strike. TPLF murdered high-ranking officers and captured the army’s stockpile of weapons and ammunition. The army personnel who managed to escape the cowardly attack crossed the border into Eritrea.

Prime Minister Abiy, the commander-in-chief of the army, as soon as he learned of the raid, took the necessary steps and mobilized the troops from all parts of the country. Within three weeks, the TPLF was driven out of Mekelle.

In June 2021, the Government decided on a unilateral ceasefire for humanitarian reasons, to allow humanitarian aid to reach people in need and, to allow farmers in Tigray to cultivate their land during the rainy season. When the Government withdrew from Tigray, it assumed this will create conditions for a peaceful solution. But that was not the case. TPLF took advantage of the withdrawal, attacked the withdrawing forces, and again invaded the neighbouring regions of Afar and Amhara. The international community failed to condemn TPLF for continuing the conflict and for the unprecedented atrocities it committed in these regions. The Ethiopian Human Rights Commission and some human rights groups such as the Amnesty International reported on these atrocities.

In fact, some in the international community were waiting for the TPLF to advance on Addis Ababa. These members of the international community were sending such mixed signal when TPLF was looting industrial plants, universities, hospitals, clinics, warehouses of international aid organizations as well every private and public properties. TPLF destroyed what it could not carry back to Tigray region. Even the farmers’ livestock was slaughtered or shot and their crops destroyed. TPLF forces raped women.

Consequently, H.E. Prime Minister Abiy Ahmed made a national call stating “Time demands sacrifice to lead this country, I am heading to the battle fronts tomorrow. Do not hesitate to join me on the battlefields if you wish to put yourselves among the greats in the Ethiopian History. …” and mobilized the entire population inside and outside Ethiopia to fight the TPLF. The TPLF was defeated. It was pushed out of the Afar and Amhara regions.

The government ordered the army not to proceed into the Tigray region. The hope was to avoid further casualties. Nonetheless, the TPLF continues to shell Afar displacing more than 300,000 people from their homes. TPLF disrupted humanitarian aid so that it could blame on the government.

The Government facilitated humanitarian access both by land and air. Various aid organizations have brought food and other supplies to the Tigray region. The ICRC and WFP have flown supplies to the region.

What conflict resolution?
The Government remained concerned that the people are in need of humanitarian assistance while the TPLF continued mobilizing to fight again. It was resolved to take extraordinary measures to allow unhindered access to humanitarian aid. For this purpose, the Government declared an indefinite truce with an immediate effect. This declaration was issued on March 24 remains in effect as the Government hopes that this will also prevent further bloodshed and pave the way for the peaceful resolution of the conflict. The Government has been cooperating with the African Union High Representative for the Horn of Africa, former Nigerian President Olusegun Obasanjo.

International entanglements
The initial coverage and perception of the conflict in the international media relied heavily on deliberate misinformation that was misguided and one-sided. It amounted to a campaign against Ethiopia. The reasons for this hostile attitude from partner Government and major media outlet were not clear for the reformist Government. Some media outlets were caught fabricating falsehood. They would not retract or apologize.

Some countries are pursuing geopolitical interests. They cannot be genuine concerns for human rights or humanitarian issues. If they were human rights issues, they would have insisted that it was time for the TPLF to account for its years of atrocities. Some have taken the lead to demonize Ethiopia at the UN Security Council. These were countries Ethiopia considered partners. Why would these countries engage in a campaign to denigrate Ethiopia and endanger its future? It is probably only known to them. Now some have started to take a more objective view. We hope that these are genuine change of direction. Some are still insisting pressuring Ethiopia with unilateral sanctions. The effects of these measures are affecting people with low incomes. We hope they evaluate such unhealthy measures and work towards mutual interest.

Ethiopia has good relations with the countries in the region. During this difficult time, Ethiopia rightly relied on Africa. It received encouraging brotherly and sisterly advice and support from our continent. It showed that ultimately regional integration is a solution for future peace and prosperity.

Ethiopia will pursue every avenue for peace and prosperity. The Parliament has established a national dialogue commission and appointed the commissioners. It is hoped that this be the best avenue to inclusively resolve the country’s age old and new problems, concerns, grievances, and aspirations. All those who have Ethiopia’s interest at heart would do well to support this forward looking and Ethiopian led process.

Ethiopians.ch is an online platform for Ethiopians in Switzerland. Our goal is to spotlight success, challenges and stories of Ethiopians who live (or have lived) in Switzerland and highlight the positive contributions as a diaspora community locally and to their homeland. Read more