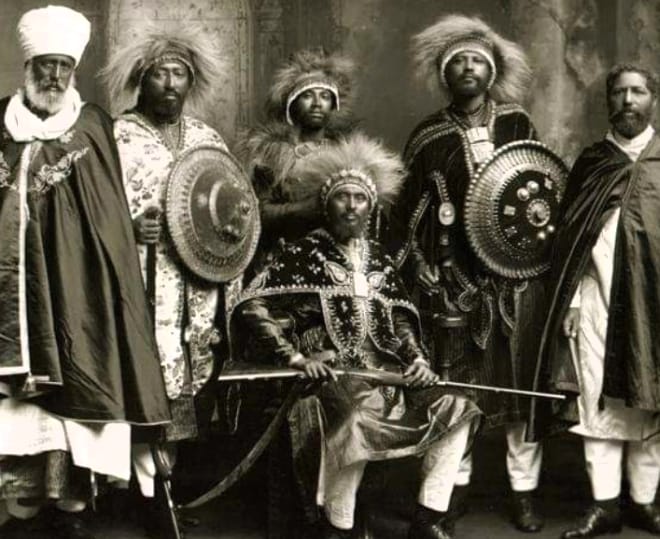 Gebru, whose name was Gobaw for many years, was born in 1845 to Desta Wolde Essey and Woizero Tiringo Wolde Tekle in Gondar, Ethiopia. He was born in the time of civil war between various lords in the country. Gebru was seven years old when the war finally ended and Emperor Theodros came to power. As his parents were extremely poor, they couldn’t support him in any way. Thus Gobaw, at age eleven was sent to live for a period with his uncle, one of the leaders in Emperor Theodros’ army but he was unhappy in his uncle’s home and later he ran away.

After leaving, Gebru met many poor people on their way to Debre Tabor to make various appeals to Emperor Theodros. He decided to follow them to ask for the court’s protection to fulfill his basic need for food and shelter. One day, as he was getting his daily food from the emperor’s court along with the other poor people, Joseph Bell, the son of Leke Mequas John Bell, saw Gebru and had compassion on him.

When he introduced Gebru to the missionaries, Theophilos Waldmeier, a Swiss missionary and one of Emperor Theodros’ craftsmen, took him into his home where Gebru was cared for and educated along with several other children. In 1868, after the Battle of Meqdela, when the missionaries were expelled from Ethiopia, Waldmeier left the country with Gebru and two of his friends named Hailu Wossen and Senbetu Daniel. They went to Jerusalem where the Ethiopians were given the opportunity to continue their education at the Samuel Gobat Missionary School. Gebru studied there for three years.

In 1872, Gebru and his friends were sent to St. Chrischona, near Basel, Switzerland, for four years of further education and they graduated with a diploma in theology in 1876. Afterwards, Gebru wanted to return to his country but Ethiopia and Egypt were at war and the borders were closed. As a result, he was sent to Gutenberg for a period to help Krapf edit the Amharic translation of the Bible. In 1879 he returned to Ethiopia after an absence of fifteen years. Gebru established schools for poor Ethiopian children in Gondar and Gudru.

However, in 1886, the missionaries were once again expelled from Ethiopia and Gebru went with them to Jerusalem. He then went to Syria where he taught in a German mission school for some time. From there he was transferred to the newly opened mission in Dar es Salaam, Tanzania. Later he received a letter from one of his friends in Jerusalem, encouraging him to pursue missionary service in Ethiopia again, as the emperor had granted Protestant missionaries permission to continue their work in Showa.

In 1890, Gebru married the daughter of Christian Bender who, along with Johannes Maier, was among the first Christian craftsmen to arrive in Ethiopia in 1856. He then returned to Ethiopia where he went to Harar and became a Bible salesman. Unfortunately his wife died of cholera when she was six months pregnant. In spite of this sad event, Gebru continued to work with Ras Mekonnen, Menilik II’s cousin and the father of Emperor Haile Sellassie I. Since the ruler liked the fact that Gebru had been educated in Jerusalem, he sent him to Jerusalem with an Ethiopian Orthodox priest on an important mission to negotiate the reopening of an Ethiopian monastery in Jerusalem, which had been closed due to unpaid bills. During his stay in Jerusalem, he was made a delegate of the British Bible Society.

Upon his return to Ethiopia, he brought three different editions of the Holy Bible to the Emperor as gift from the society. In return, the emperor sent them two elephants’ tusks inscribed with his name as a token of his appreciation. As the ruler of Harar admired Gebru, he made him the mayor of Harar. Gebru served him diligently and fought against corruption in the administrative region. Just before the Battle of Adewa, the ruler gave Gebru letters of recommendation and sent him to the emperor who offered to grant him a request. Gebru asked to have his name changed to Gebru and to be made mayor of his province of Gondar. The emperor agreed to grant his requests after returning from war.

Thus, after the Battle of Adewa in 1895, Gebru-renamed Kentiba Gebru-became the first mayor of Gondar. Then the emperor also sent Gebru to Sudan to negotiate the release of Ethiopian prisoners captured during the Sudan war with Emperor Yohannes in 1889. He presented his case in Arabic-a speech published in the newspapers-to the Kalifa of Sudan who consequently released all the prisoners. He was then sent to England with Ras Mekonnen as an Ethiopian delegate to attend the coronation celebration. In 1930, Gebru became the vice president of the first parliament in Ethiopia. With a first group of delegates he was sent to America where he spoke about the conditions in Ethiopia to many African Americans interested in learning more about the country. As a result many Americans became more familar with Ethiopian culture and society.

When the Italians invaded Ethiopia, Gebru went to Gore Town, Illubabor Province, in southern Ethiopia. At that time he was living a life of great suffering because his children were killed unfairly and his family suffered with him for many years. Soon after the Ethiopian liberation, he was made president of the parliament. For many years he devoted himself to serving his county and to promoting the well-being of the nation. But his efforts were not well received or valued because of his Protestant faith and his humble family origins in particular.

Gebru spoke German, French, English, Oromigna, and Amharic. Negadras Gebreheywet Baykedagn commended Kentiba Gebru and his friend Aleka Taye by saying: “So far, out of a number of people who were educated after being exiled in foreign lands or through foreign missionaries who came to Ethiopia, and who serve their governments loyally, two brothers’ names stand out. But we label them as backsliders and criticize them. I have been here in Addis Ababa for three years and I have never seen anyone who loves his country as they do. But no one has acknowledged them for this so far, I am afraid. It is very sad. Anyone who observes their lot would despair at the realization that the Ethiopian government has no use for its loving citizens.” Even though Gebru was knowledgeable, educated, and had experience working in the highest echelons of society, he had very few possessions and struggled with poverty in his old age until his death in 1949.

Source: “Stars that glitter: Kentiba Gebru Desta: Suffering, Persecution…For the Gospel and for Patriotism” in Berhan, an Amharic bimonthly publication of the Evangelical Churches Fellowship of Ethiopia, No. 46, 12, Meskerem – Tikimt 1995 [i.e. September – October 2002].

Ethiopians.ch is an online platform for Ethiopians in Switzerland. Our goal is to spotlight success, challenges and stories of Ethiopians who live (or have lived) in Switzerland and highlight the positive contributions as a diaspora community locally and to their homeland. Read more