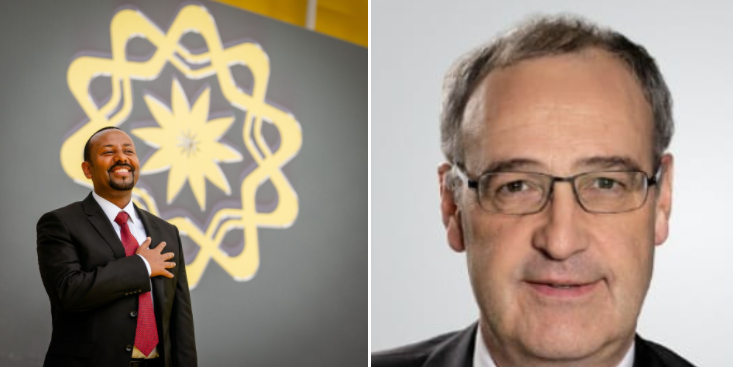 A week after the Email campaign by Ethiopians in Switzerland to the Swiss Federal Department of Foreign Affairs FDFA, Europe Division, President of Switzerland Guy Parmelin sent congratulatory message to Abiy Ahmed (PhD) for his election as Prime Minister of Ethiopia.

Addis Ababa, October 29, 2021 (FBC) – President of Switzerland has sent congratulatory message to Abiy Ahmed (PhD) for his election as Prime Minister of Ethiopia.

President Parmelin has pledged to foster collaboration with the Government of Ethiopia in elevating the existing bilateral ties between the two nations and working closely on major regional issues together.

It is to be recalled that leaders of African countries attended the founding of the new government of Ethiopia October 4, 2021 as the Sultanate of Oman, Amir of the State of Qatar, Kingdom of Saudi Arabia, President of the Republic of Cameroon, Rwanda, the Russian Federation, the State of Eritrea, Chancellor of Germany, Prime Minister of North Korea, among others, have so far sent a congratulatory message to the Prime Minister Abiy Ahmed.

Ethiopia and Switzerland signed a Memorandum of Understanding to intensify the bilateral dialogue, which is now taking place every year.